Obamium, the Remote Start from Scratch - 2019

Yeah, so I chose this name because I named my car obamacar. You can see its instagram page here if you want, I don't post often.

This is going to require context 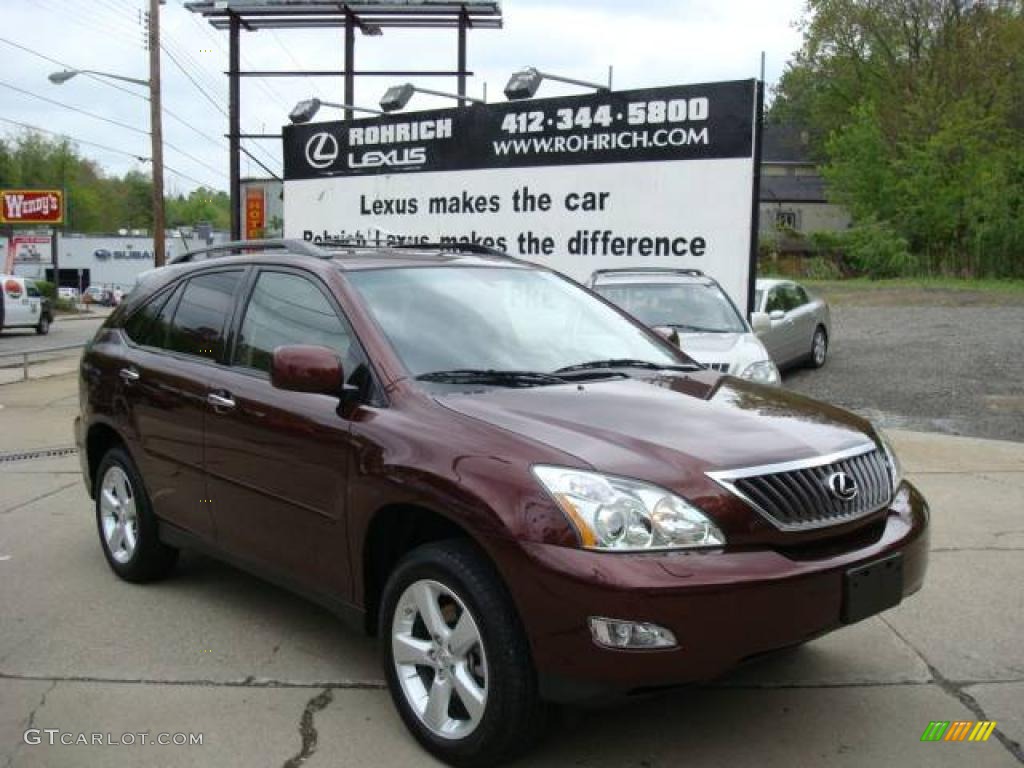 It's a reliable Lexus. Unfortunately, while driving to the ACT, the alternator broke. During one of the most important tests. Wonderful

Anyways, after repairing it, I had a sudden sense of connection with my car, as I didn't have any experience with any car repair beforehand. Not even an oil change by myself. Therefore, it needed a name, and obamacar was chosen.

The real reason is because there were these memes of Obama Prism floating around at the time, called obamium. That's why remote start is called obamium.

In November 2019, I got the idea to make my own remote start. How hard could it be? All I had to do was figure out how to make obamacar think that a key is inserted and turning, right?

I still have a folder on my desktop all these years later containing various wiring diagrams I found online about obamacar's ignition lock cylinder wiring. Here's an extremely important one: 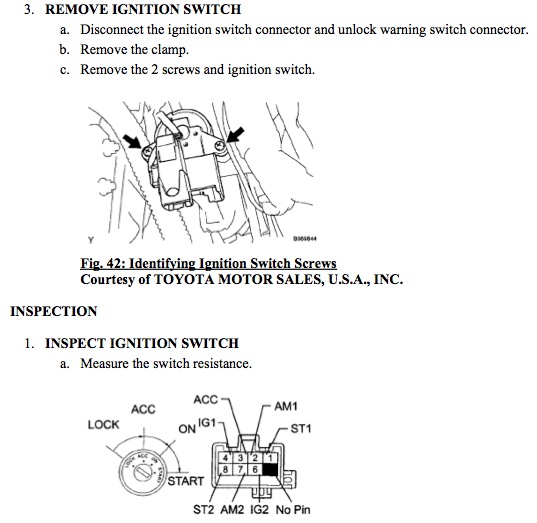 This photo was instrumental to figuring out how to start. I found out that AM1 and AM2 are both always-on 12V sources, with IG1 and ST1 being low-current relay inputs that connect to AM1, while ST2 is a higher current input from the high current AM2 supply, with thick wires. IG2 is low enough current to be controlled with IG1 as well.

While figuring this out, I also busted a fuse when everything was on a breadboard, connecting AM1 to GND, and I had no spare fuses. I had to get a friend's dad to drive me to robotics that night, at least he was proud because he found out the reason why my car broke down was because I was making remote start.

In the super chilly November night, I pushed wires into the existing connector in order to have contacts. I then soldered these to some automotive connectors I found off eBay so that I could have a wiring harness. Yes, I soldered to a wiring harness, this is a sin, but I don't have crimp for it. I'm using solid core wire anyways, it's not like this thing is built to last the life of obamacar!

In the end, I had 2 connectors with the pinouts when combined:

I added the trunk opener because I didn't have an actual key fob with lock/unlock until nearly a year later.

So we had to do the following:

The excitement I had when this actually worked.

I used the following to complete this:

This was an incredibly simple proof-of-concept. Here's a photo of the very first version, Obamium v1, on perfboard: 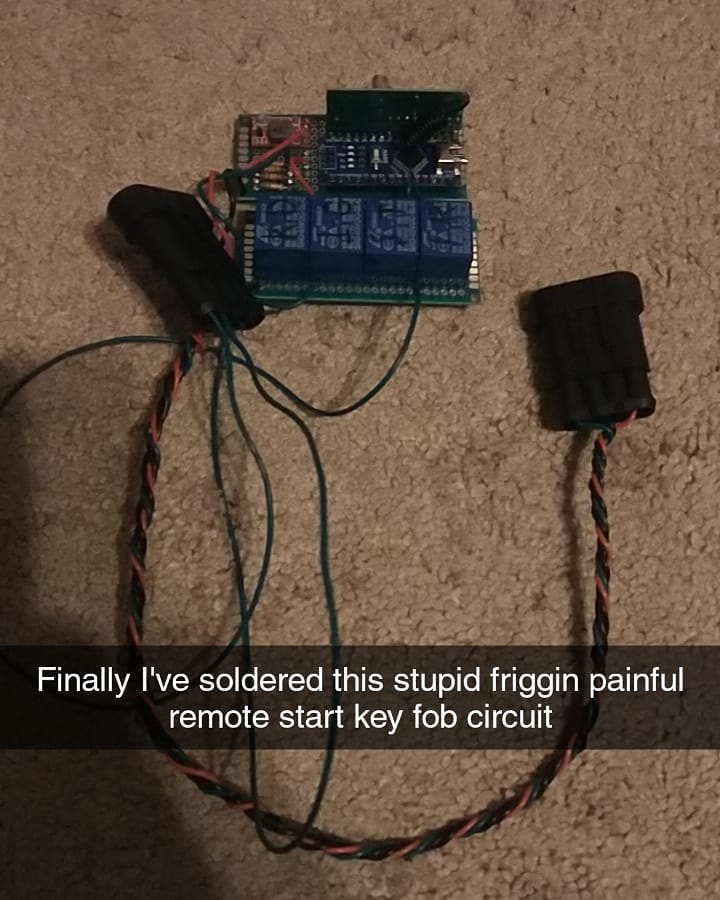 I was very unprofessional on my Snapchat story.

Unfortunately, I can't insert videos in Joomla, so you're just going to have to imagine a video version of this with audio. The first remote start, December 18, 2019. At least, the first video.

I should mention at this point that all software is written in C, of course, with the normal Arduino IDE. 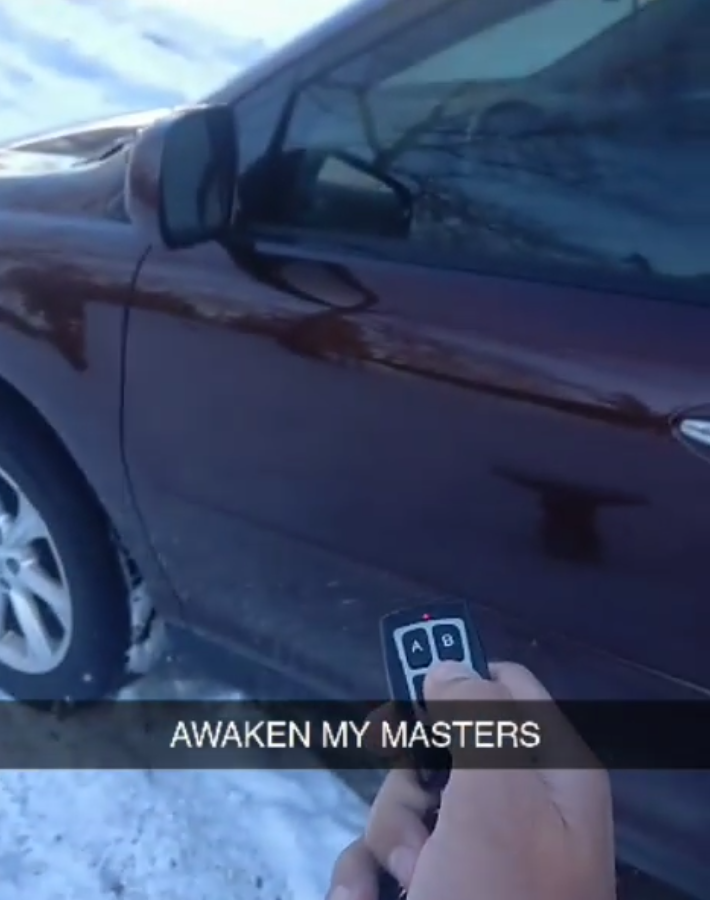 This was an amazing feeling.

I made remote start!
And I broke it when trying to wrap it in duct tape to put in my dash, so I threw it away!

Time to start over...

I wanted to add the ESP32 as well, a microcontroller with WiFi so that I can spend the little time I have in school connecting obamacar to the school WiFi and start from my phone. Cool, right?

I decided that after watching many GreatScott videos and hearing his sponsorships about JLCPCB, I can give JLC a try with a custom PCB. Here's my result after a couple days of figuring out how all this works: 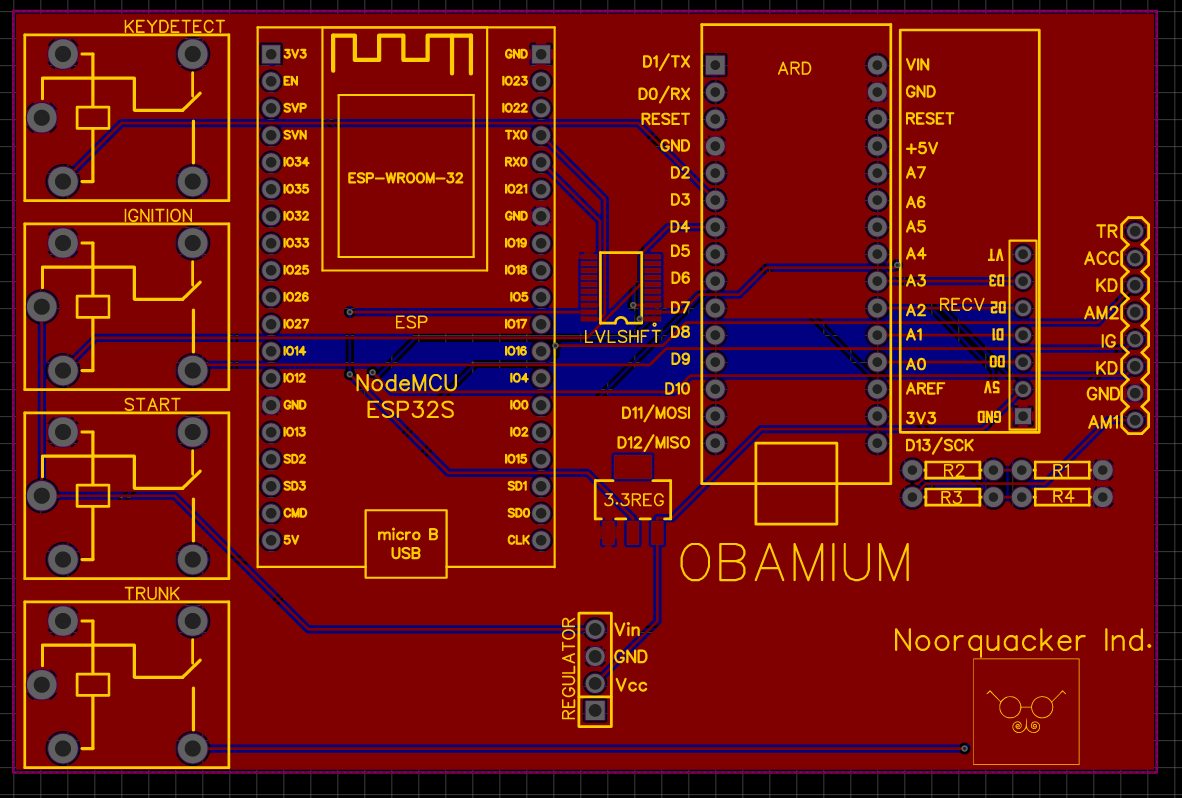 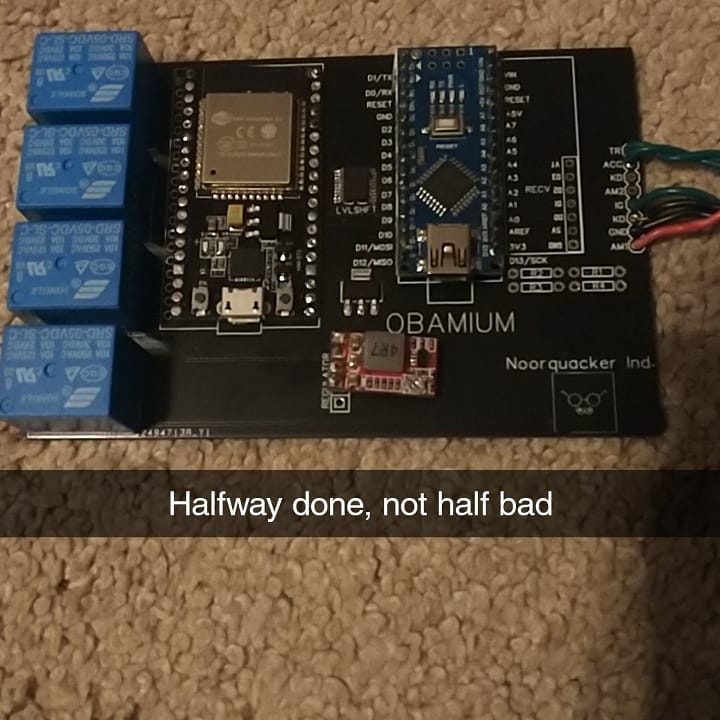 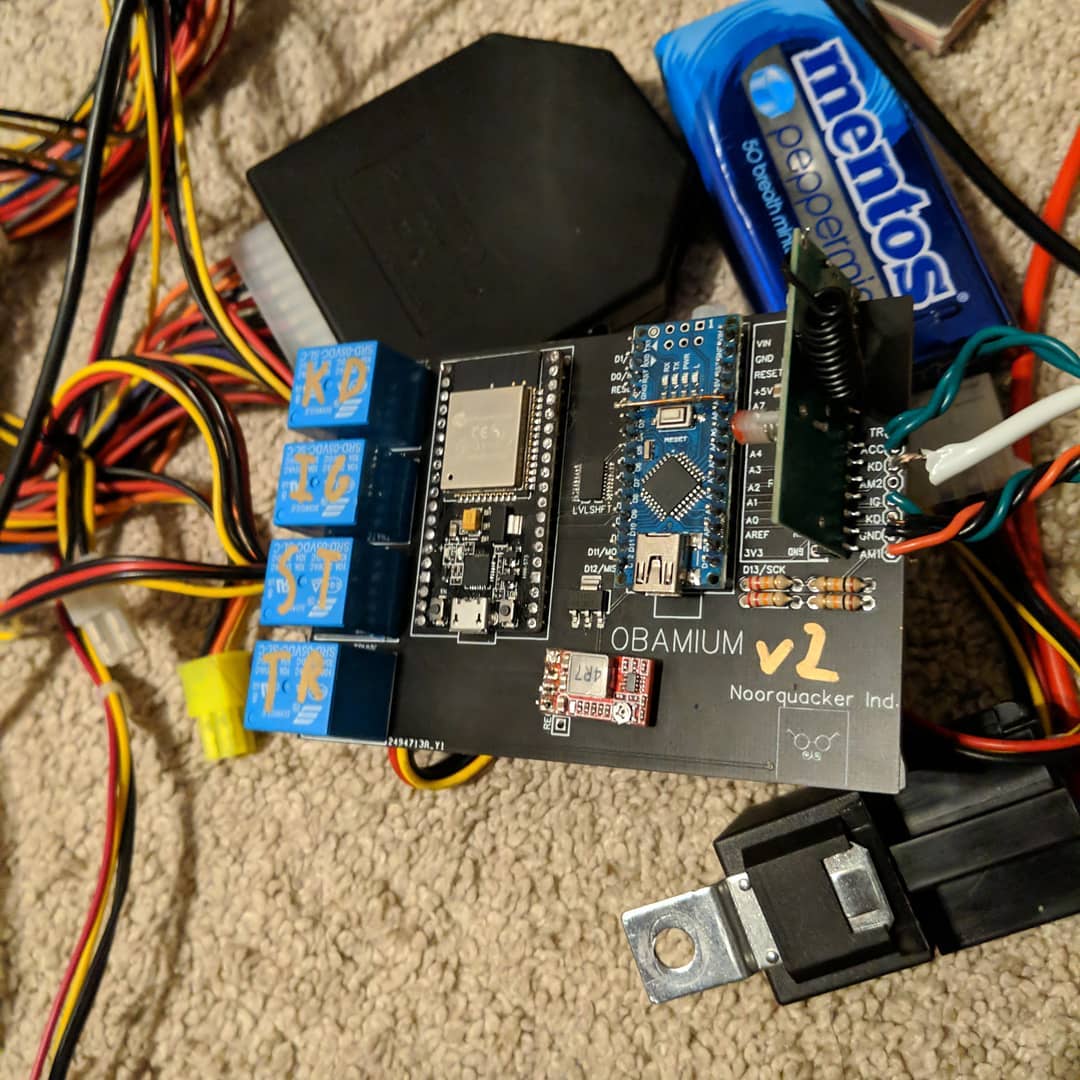 Yep! Successfully wired to the harness with the relay as well, ready to throw in obamacar, and it worked. The code is the same as Obamium v1.

However, I had some issues that I don't have photos of, such as directly driving 40mA relays with a 30mA-max Arduino Nano. Whoops. I ended up making a mess of transistors and stuff underneath, so it worked out.

Unfortunately, I didn't end up using the ESP32 because I couldn't get it to talk over UART with the Arduino. Yes, I used the TXB0108 bi-directional level shifter, but for some reason it gives me problems, so I removed it.

Finished! Except it broke in around June 2020, during quarantine. I didn't drive anymore, so I saw no reason to fix it.

Okay, it's May 2021, I barely drive because quarantine and online school, I got through winter without remote start fine, I don't care, so why did I make version 3? Heheheh, you see, I got asked out to prom, and I had a month to make obamacar the best car ever. This included remote start.

I wanted the following:

So I had until June 11 to get this done. 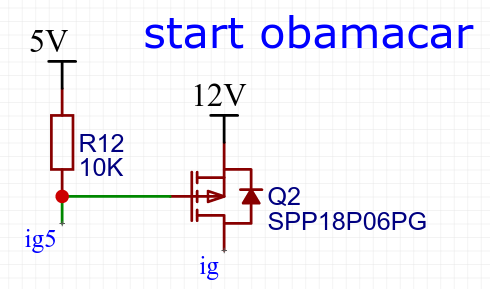 After many mistakes such as this, that I found out on the fourth version, I made something: 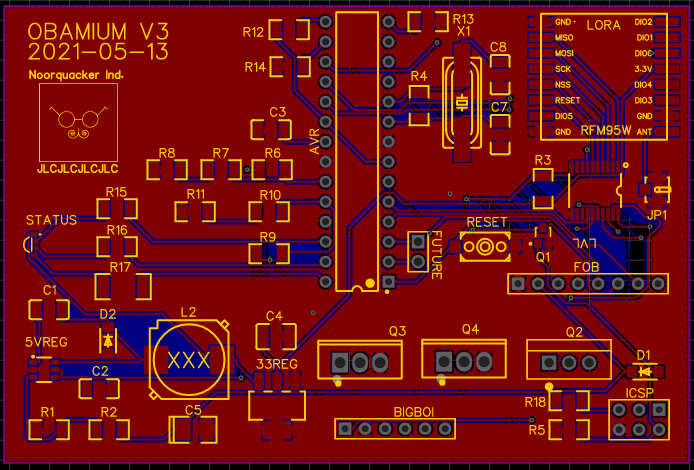 Anyways, LoRa also needs someone on the other side, so I made a transceiver for talking between my phone and another LoRa communication module:

Unfortunately, since the main Obamium v3 pcb didn't work, I never made the fob, so that was sad. The AVR never responded to my USBtiny ISP programmer.

I also had a week to do all of this until prom day, so I decided to abandon this. Sadly, Obamium v3 didn't work, but I eventually learned that the TXB0108 was causing issues. Desoldering it worked, but I found that out nearly a year later.

Okay, why am I going to mess up again? I already sank money into Obamium v3 only to watch it fail, how do I know I'm not going to make the same mistake?

Jokes aside, the failure of Obamium v3 was holding me back from doing it again because I felt like I didn't know what I was doing anymore.

In Obamium v3, we had some issues:

Most of these came down to rushing the project. Eventually, though, I got there.

I decided that to overcome these, I would get rid of LoRa and also use the Arduino Nano Every. It's an Arduino Nano that has features that I don't really care about other than castellated pins on the side, meaning I can solder straight to the PCB instead of putting headers through 2 boards and having them stick out a bunch. 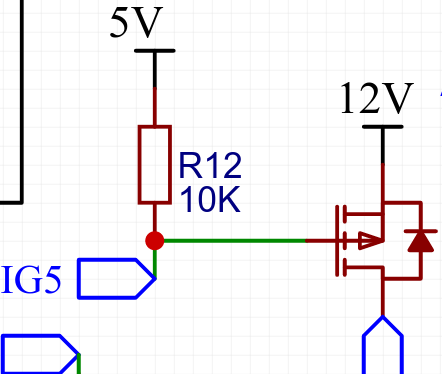 Yet I still made the mistake of trying to drive a 12V P-channel MOSFET with 5V.

Anyways, I finished and got my PCBs ordered and arrived. 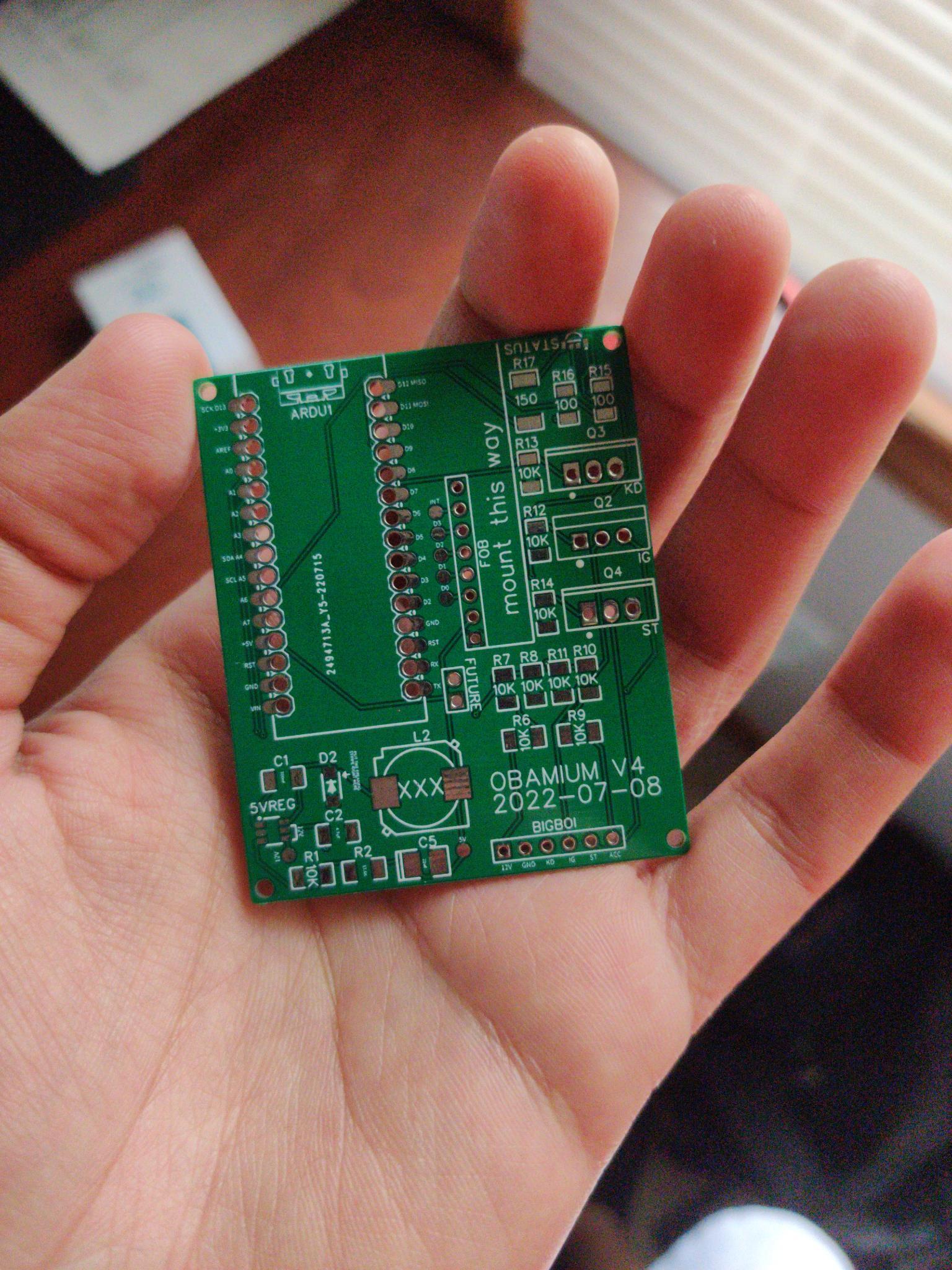 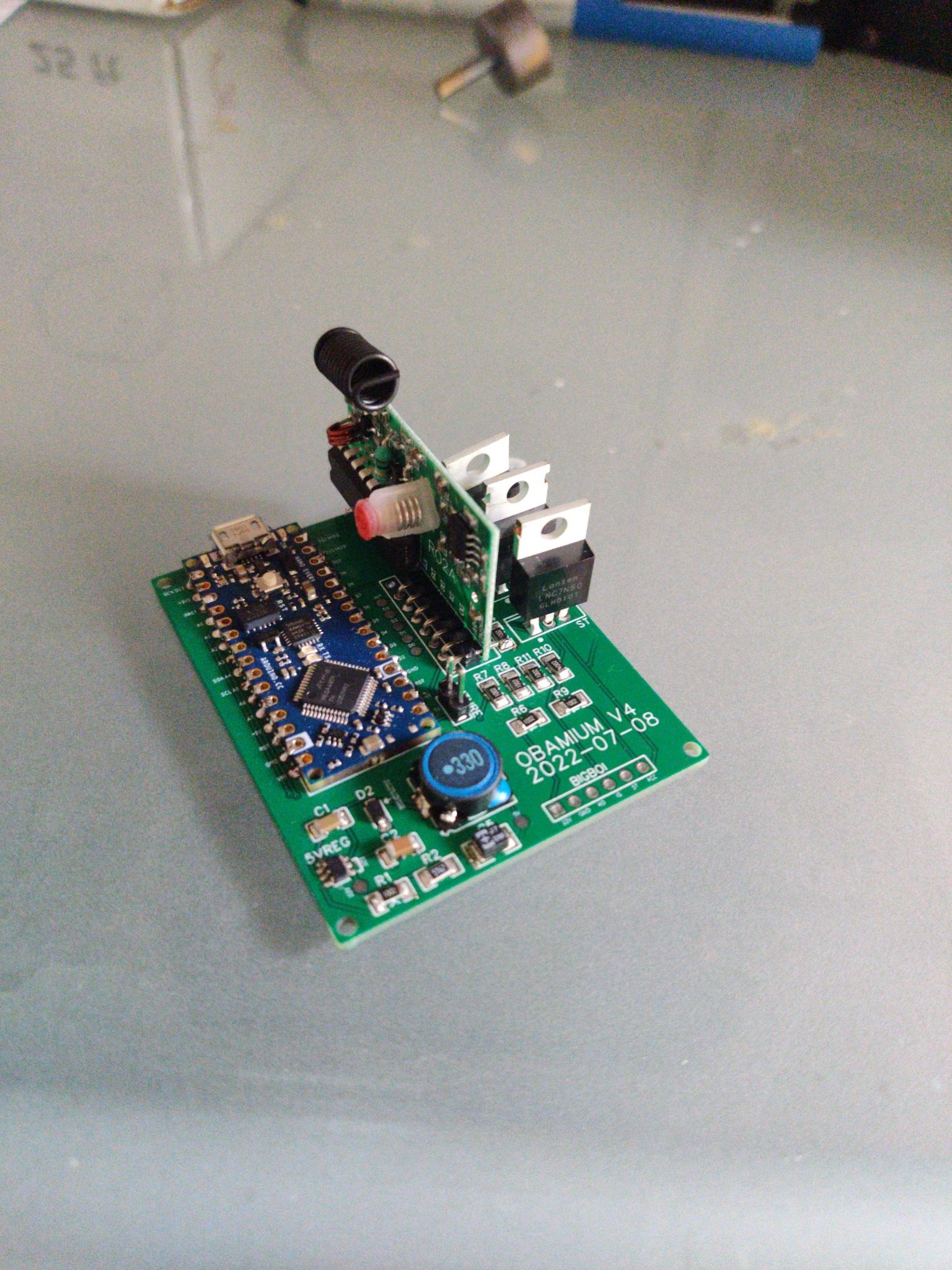 After not that much soldering and trying not to destroy it, I was done!

Except the good old driving-a-12V-P-channel-MOSFET-with-5V mistake came to bite me in the back. So I did what I had to and used my X-Acto to cut a trace and started to solder up a diode (for inductive spiking, actually, with the starter relay) and an N-channel BJT for actually driving the MOSFET, with a pullup resistor to 12V. That way it switches the MOSFET gate between 12V and GND, which is correct.

But this was ugly. 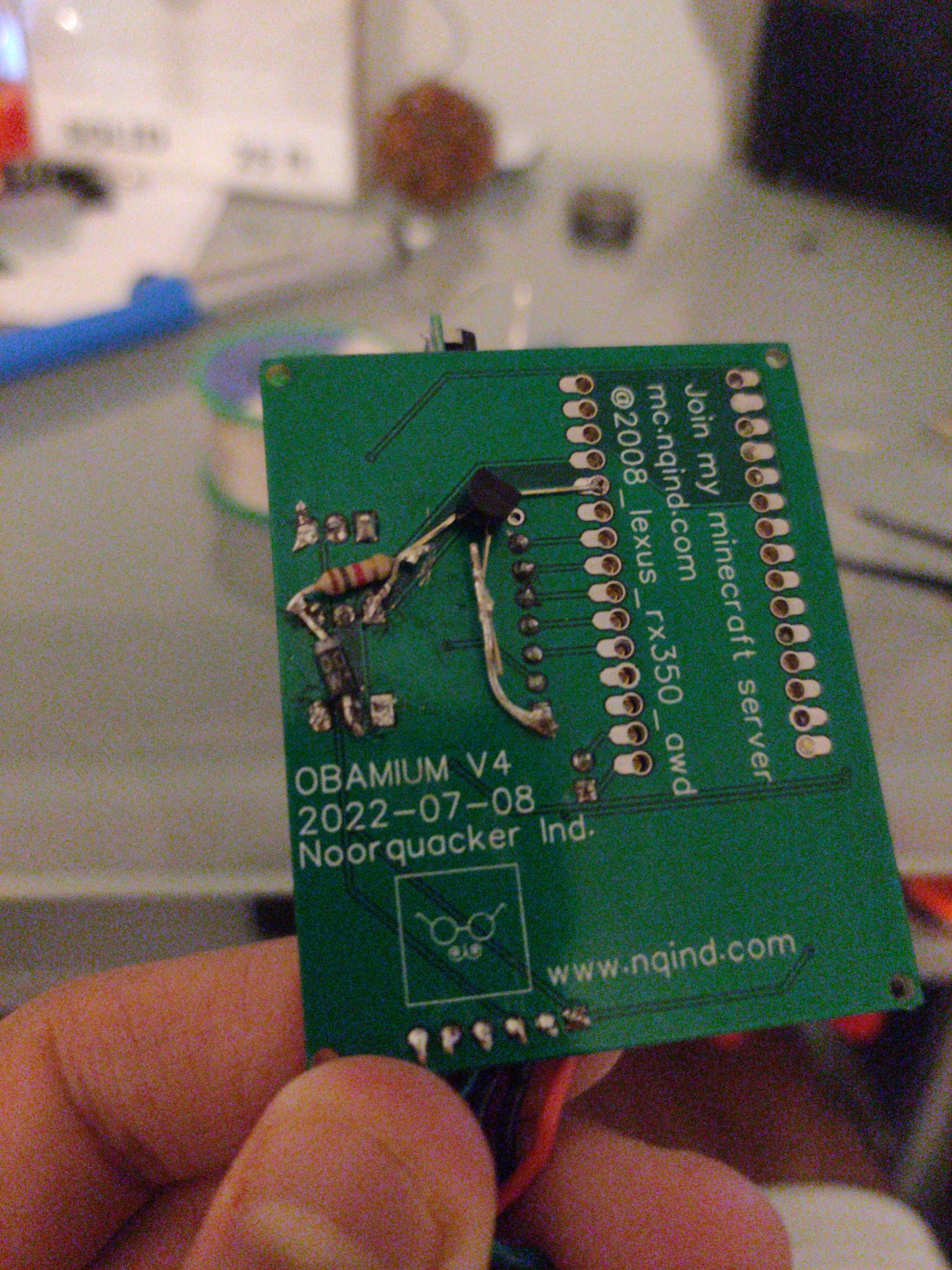 It ain't stupid if it works! 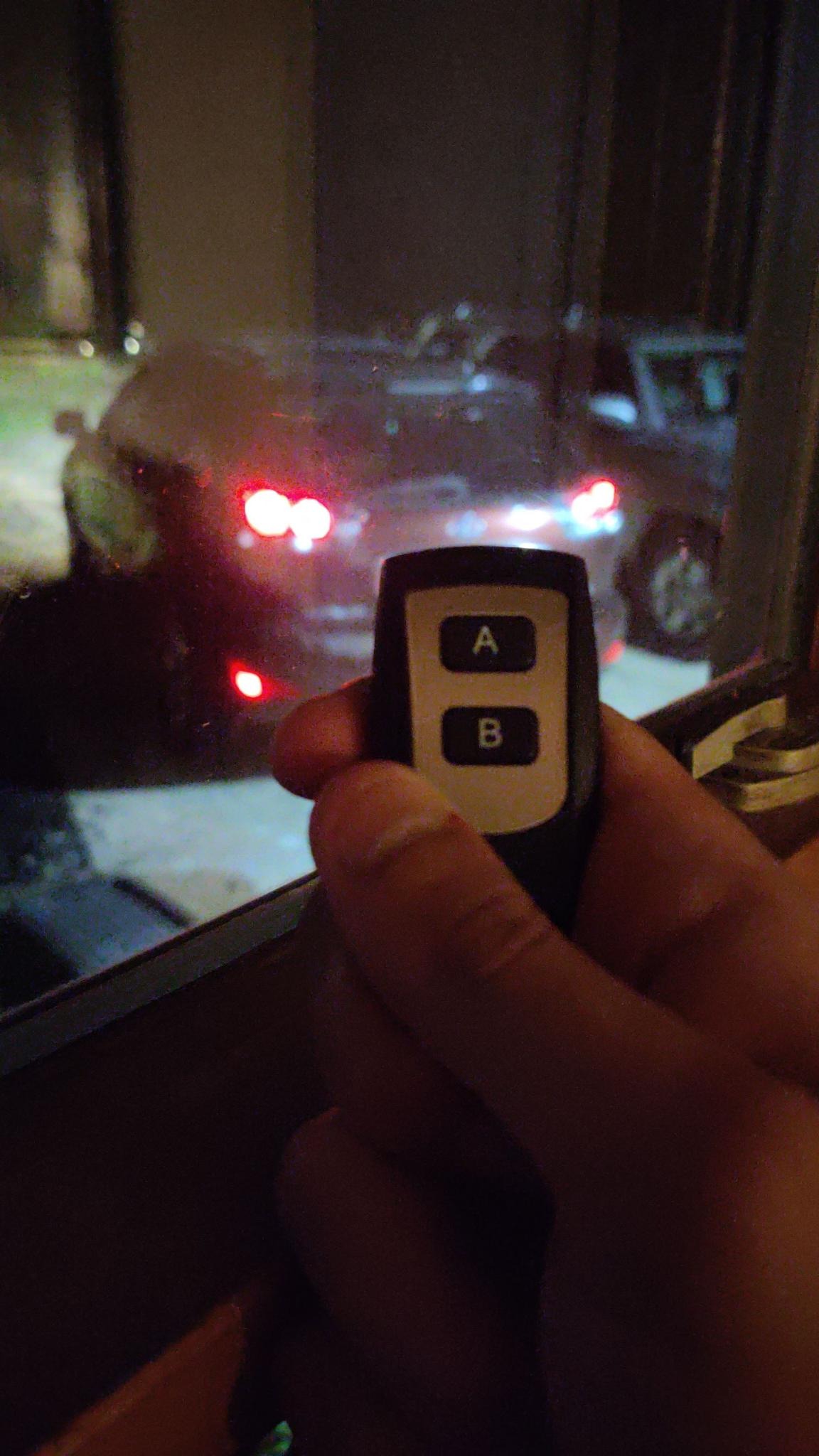 And it does work.

Whenever I get the money to buy more LoRa nonsense and use the ESP32-C3 successfully, that way I can use only a 3.3V logic level and not use level shifters for talking to the LoRa modules.

This is possibly the project I'm most proud of. I can even start obamacar from my dorm room. I hope you enjoyed the read.